Eek – this week my trusty tech-mentor, Hannah, was taking some well earned leave and the technophobe was on her own!

On the “to do” list was the blog on the GWL website about the four submissions received from week’s prompt and to introduce a new image as a flash fiction prompt for the coming week.  Also, I was to tweet the new prompt. Unsurprisingly this took me most of the day but I have to admit to a sneeky smugness at crossing everything off the list.

The stories from last week have been very varied and interesting.  Each one is a tiny creative jewel.  Here they are:

1.”I move closer. Alert to the red scent of your rage. Your breath snorts and rasps. Each intake another chance to heal.”

Are you angry still? (@_RedFi)

2.“In the distance, I heard my mother’s voice: ‘Come away from that strange creature, Wendy!’ You see, that’s how it’d started with Aunty Flo, the one we don’t talk about who danced for the King, a candy bar from a travelling musician. The chain came later.” (@H_Cross_21)

3.“Quite an adventurous and nice dream you had, but you’re also not plump, when awake? You are beautifully beary!” she said. “And you know what? I now will share my hazelnutbar with you dearest bear. And with you beariest red squirrel, that you are in your dreams, too, of course!” (@HagandSquirrel)

4.“It happened again, didn’t it?” Kim wagged her Flake in her best friend’s direction and Wendy nodded helpessly. It was not easy being a were-bear and certainly not during hunting season at Miss Bunty’s School for Gels” (@JayDeeSunshine)

Spurred on by the quality of these submissions, I selected a very different image as this week’s prompt.  It is slightly more political in spirit and is one of many postcards from the GWL archive.  For some of us of a certain age, this image may recall memories of the Greenham Common protests.  Here it  is: 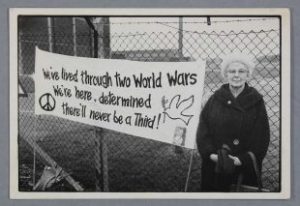 I hope the shiny, tiny stories above will have encouraged readers of this blog to have a go at a tweeted story.  As usual, stories do not have to describe or be explicitly linked to the given image – the images are there simply to provide inspiration.  Stories should fit into the format of a Tweet (or a series of linked Tweets) and be told in less than 240 characters! Remember to  tag @womenslibrary!  For those who do not tweet, stories can be e-mailed to info@womenslibrary.org.uk and identified as #FlashFiction Friday.  Submissions should be made on or before Friday 22nd February and will subsequently appear on the GWL website.  #FlashFictionFriday is open to all so get writing, tweeting and sharing with your friends!