Sleeping with the Imposter

So, here I am, cosied up in my aparthotel room in Edinburgh listening tae storm Dennis blawin a hoolie at the windae. I was pleasantly surprised with the budget room, it has all the mod-cons that I need, even a dishwasher! I decided to stay for the week rather than commute because I live semi-rural and thought a week in the big smoke would be a novelty–the long lie was also a no brainer.

I’m prepared to start my  internship at Luath, but I have to admit, the imposter syndrome is clagging in. It fills me with doubt about my abilities and, if not managed, impedes creative flow.

I first learned about imposter syndrome during staff training when I was a community psychiatric nurse. The facilitator discussed the syndrome, “we all experience it” he said, “it’s that feeling when you’re saying your piece at the team meeting, at the same time thinking that you’re talking rubbish, you don’t have a clue and your colleagues know that you’re at it.” I was stunned. I knew exactly what he was talking about and thought it was just me being me. Well, it was me being me, but I was comforted to know that I was not alone.

And… there are five different types of imposter syndrome–who knew?

This is something I have chatted about with my lovely classmates, writing buddies, even published authors. It doesn’t seem to matter how much positive feedback, constructive criticism, success or general comments of loveliness we receive about our writing, Imposter Syndrome sucks the self-belief right out of us and makes us terrified, makes us run away from our exhibited pieces–I cringed as my esteemed fellow student and Imposter Syndrome compadre shrunk into the shadows as my mother-in-law ordered me to stand by my piece at the River Deep Mountain High exhibition, so she could take a photograph to show her friends–just as Victoria Lothian writes.

I don’t think the issue will magically disappear as our confidence grows, but I do think the voice might fade or, we might feel strong enough to tell it to hud it’s weesht!

I wonder if I’ll be exposed tomorrow… I’ll sleep on it. 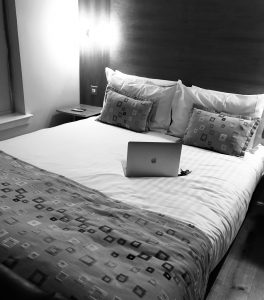