Like Hamzah down in Leeds, I’m also going to be doing another internship over the course of the summer – with Cumbernauld Theatre!

The building doesn’t look much like a theatre from the outside (I promise I’ll get pictures). In fact, Cumbernauld Theatre was originally built in 1960, converted from abandoned farm cottages by members of the new town who, seeing that the town planners had neglected to include any cultural facilities, endeavoured to create their own as volunteers. Things weren’t perfect – the 55 seat studio theatre has a tin roof, so when it rained during performances the audience certainly knew about it. But now, 59 years later, the theatre boasts a 250 seat auditorium (with the original studio playing host to workshops), the centre is run by the professional Cumbernauld Theatre Company, and next year the company will be moving to a state-of-the-art new building, in a more accessible location from the town centre and train station.

That’s where I come in. After much liaising about where to fit in an aspiring playwright as an intern, I have been asked to research the theatre’s archives, dating all the way back to the 60s, and present a spread of their history to appear in the Autumn programme – this Autumn being the last ever season to be held in the original building. So, expect more and much more detailed accounts of Cumbernauld Theatre’s history in the coming weeks!

I’ve also been asked to help out with the theatre’s summer youth programme. The Summer Academy is a series workshops aimed at different age groups of children. 6-8 year olds and 9-12 year olds are given a week-long course in which to devise a performance, to be shown at the end of the week, while the 13+ group have a more intensive two week course. All the classes will be drawing inspiration this year from Shakespeare’s A Midsummer Night’s Dream, and my job will be liaising with the tutors, taking part in the workshops myself and helping the children plot and write a performance. The real trick, apparently, is striking the right balance between steering the kids without taking over what is supposed to be their project – something I’ve found to be a key part of collaborating in theatre no matter the age range.

I’ve been to Cumbernauld Theatre four times in the past few weeks. The first time for my initial interview, to discuss whether the theatre and I were a good fit for one another, and more recently to witness some of the kids who’ll be attending the Summer Academy in action. I sat in two Saturdays ago on the term-time classes for 6-8 and 9-12 year olds.  I haven’t worked much with children, certainly not a big group of them before and never as young as 6, though I have been mistaken for a 12 year old boy on several occasions. I was, to put it mildly, terrified going in. What if a child started crying? What if one kid started bullying another? What if they all started bullying me? At what age do you not need to support their heads anymore?

More than anything else, however, the day proved overwhelmingly nostalgic. I recognised games and songs I used to love in drama classes years ago. And the kids – who I’ve been reassured I’ll never be left alone with, saving not just the cost of a PVG but also me from bursting a blood vessel from stress – are actually all sweet. Although they all seem to have an alarming compulsion to gravitate towards the most dangerous looking objects in the room whenever they think no one is watching. By the end of the day I was in awe of the two tutors who somehow manage them all every Saturday.

Last Wednesday and Thursday I was up again, to watch another group of children rehearse a show called Remote, written by Stef Smith in 2015 for the National Theatre of London, about young people navigating this age of technology and information. Or, as the Cumbernauld Theatre programme puts it: “Remote is a play about protest, power and protecting yourself.” What was most interesting to me was seeing how hard the children worked, and how much they improved from the first run-through I saw to the dress rehearsal the next day. All of them were guided and motivated, of course, by their director Hannah, who doubles as Cumbernauld Theatre’s Drama Practitioner.

From July 1st I’m going to be visiting the theatre and archives on a regular basis, while surfing the couches of some very gracious friends in Glasgow and Edinburgh. I await the next few weeks with excitement and (just the tiniest bit of) terror.

P.S. Having taken 130 hours to finish it, I am never touching Persona 5 again. At least not until the new downloadable content comes out. In the meanwhile I’ll have to find another game to report on for the sake of quirkiness. 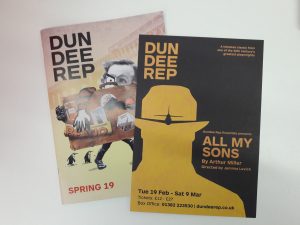 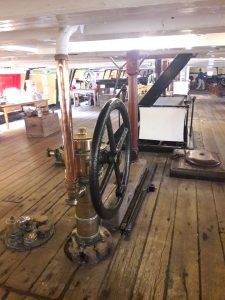 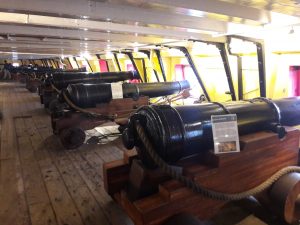 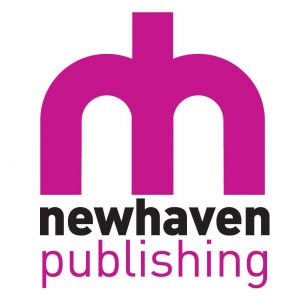