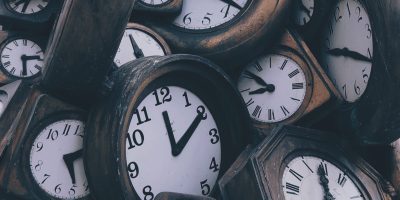 Below is a snippet from a creative essay I have been working on over the last semester. Enjoy!

Leaf covered paths and interwoven branches scatter my memory of that place. Odd sculptures or wood carvings of dragonflies littered the pathway. The ageing sawmill centred it all yet hadn’t been in action for years. As a child, I would find myself playing along the footpath only to be told not to stray too far. That is how I remember Mabie Forest.

Paul Cezanne’s Forest painting (c. 1902-1904) comes to mind. The trees dominate the skyline, though, admittedly, it is a much brighter skyline than one we would find in Scotland. Rich gold lies beneath, encompassing rocks that scattered the floor. It all moves together, swaying against a light breeze that brushes over its surface. Paint is dipped and swirled to mimic the movement, dancing against each stroke. It fades at the edges; we are reminded that this is a painting and not a fleeting memory. “The father of us all” is how Matisse and Picasso labelled Cezanne. A man who communicated between artistic movements. A man who inspired the inspirers, it seemed.

There was a marble woman who haunted Mabie Forest. She towered around the corner of one of the many paths and stood out against the wooden portrait. She haunts my dreams and crawls up unexpectedly. She calls me in to question. Her stark white only seems at home when the snow settles in. However, her ghostly presence is only magnified for she would disappear entirely. The memory of her is ever stagnant between the lyrics of my childhood. I cling onto them, hoping for reassurance, but I can never be certain,

Those trees that intertwine themselves at the top of Cezanne’s work hide something. They hide their secrets and whisper between their leaves. We are not privy to their knowledge; we are simply witnesses to their unknown. You could hide in between their bark and still know nothing of what they perceived. You could clamber and twist yourself up their ageing branches and never see their tipping point. Greens become emeralds, and emeralds become diamonds. There is a richness, a depth, in each of his strokes.